My Conversation with Ray Bradbury

Remember your teenage angst?  The hopeless brooding.  The tormented waiting.  The painfully unanswered questions like “Why doesn’t anyone understand me?!” and “Will the boy I love ever notice me?!”.  Well, there was only one thing during those years that gave me solace… Ray Bradbury.  His beautifully crafted stories whisked me away from my youthful strife.  And although they took me on fantastical trips to Mars or into bleek Sci Fi worlds of censorship, they poignantly revealed so much about my place in the real world.  So naturally, a little piece of my heart was shattered today when I found out that my icon had died.

I want to share with you a conversation I got to have with Ray Bradbury, but first it calls for some foundation.  The author was such a huge influence on my teenage brain, that I was determined to follow in his footsteps.  Writing became my passion.  Nay, my obsession!  I studied his words more than I studied for exams, regardless of my teetering grade point average.  Like a mad woman, I started entering poetry contests and essay competitions.  By age 16, I had won many a literature smack-down (yes, that is a technical term!) and was offered a position with the Los Angeles Times’ youth newspaper, L.A. Youth, as a teen writer.  I was well on my way towards my Bradbury aspirations.  For two years, I wrote like the wind and pigeon-holed my niche as the newspaper’s celebrity interviewer!  From pop stars to movie directors, I was living a teenage dream.  However, all of those amazing experiences paled in comparison to one life-altering phone call.

By this point I was getting ready to graduate high school and leave my position at L.A. Youth… I had been accepted into my dream college.  With all that had happened in my young life, there was still one driving force – Bradbury.  If it wasn’t for him, I wouldn’t have pursued writing, had been given such awesome opportunities, and gotten into an amazing school.  So, one Spring morning I decided to sit down and write him a letter.  I told him of how reading his short story “That Woman on the Lawn” changed my life, calmed my wild heart, and made me want to be a writer.  I told him of my adventures in the pursuit of writing and my young career as a journalist.  And I told him of my dream to close my career at L.A. Youth with a final interview with him.  I sealed up the 5 page letter and nervously shoveled it into the mailbox.

One week later, the phone rang.  My mom yelled from the other room, “Sam, can you get that?!”.  Like any teenager, I irritatedly got up from the couch and looked at the phone.  My heart stopped as the caller I.D. literally read (no joke!) “Ray Bradbury”.  You would have thought I was a 70-year-old smoker because my 18-year-old lungs just about gave out.  With hurried breath and a cracking voice, I answered the phone, “He-hello?”.  “Hi, This is Ray Bradbury.  Is Samia there?”.  Somehow I mustered the strength to admit my identity.  He told me that he had received my letter, it had made him cry, and that he thought this was as good as any time to do that interview.  He then proceeded to stay on the phone with me for an hour answering every question I could think up (the interview is at the bottom of this post).  Besides the day that I married my best friend, this was the greatest moment of my life.

It’s been 10 years since that fateful phone call, but I think about it almost every day.  When I’m feeling lost or insecure, I think of his kindness and the wise advice he imparted to me.  This literary icon took the time to have an hour long conversation with an aspiring teenage writer.  Not only was it an unbelievably kind gesture, I think it speaks to the integrity and true nature of what a good man he was.  I will forever be grateful.

So in good old Frosted Petticoat fashion, we shall make a wedding inspiration board in his honor.  With hints of nightmarish carnivals, futuristic time-travel, and martian escapades, I present to you The Bradbury Nuptials: 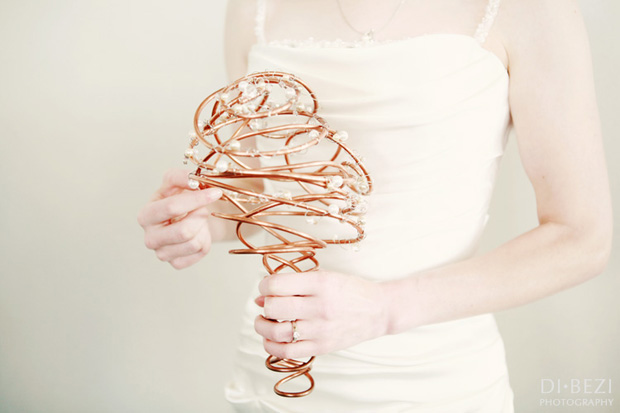 Here are some of the highlights of that serendipitous interview I had with Mr. Ray Bradbury:

Q:  What were you like as a teenager?
Ha!  Like most boys, very shy.  I didn’t have any experiences with girls until I was a 19-year-old.  So, maybe it’s just as well because I think that I would have gotten in trouble.

Q:  What was your first job?
I sold newspapers on a street corner when I was 19.  Before that I didn’t have any jobs.  There was no work.  We were in the middle of the Depression.  My father was out of work when I graduated from high school.  So I sold newspapers on a street corner.  It was at the corner of Olympic and Norton [in Los Angeles] from 3 to 6:30 p.m.  I made $10 a week, which kept me off my parent’s back.  The rest of the day, I had time to write my short stories.

Q:  Did you go to college?  Is that where you learned to write so brilliantly?
No.  Don’t go to college and learn to write!  That’s bad.  They would have ruined me!  The teachers would have wanted me to write their way instead of my way.

Q:  What was your first published work?
I had a short story that was published in Rob Wagner’s Script.  It was a magazine sort of like the New Yorker.  And my first story appeared there when I was 20.  There was no payment for me, but they gave me copies of the magazine.  In the beginning, it was very exciting.

Q:  At what point did you think you were a successful writer?
I actually never thought about it.  I think that one shouldn’t think about that sort of thing. It happens or it doesn’t happen.

Q:  If your house was on fire, what would you grab?
All of the photographs of my children.  I have four daughters and they’re all wonderful!  I have eight grandchildren and they’re wonderful!

Q:  Do you view your work as a timeline of your life?
If you read my books you know me.  I don’t have to write an autobiography.  Everything about me is in my books.  They’re all my children.

Q:  What advice do you have for young aspiring writers like myself?
Fall in love and stay in love.  Don’t do things that other people want you to.  Do the thing that is nearest to your heart and stay in love with your work.  If you do that, you will do excellent work.

Cheers to the legend!